There is no Typhoon, Cyclone or Tropical Storm activity reported that is affecting any major trade lanes as at the 26th April.

A combination of fog and strong winds have added to berthing delays at some China ports.

Dalian – The port was closed 24th to 25th for almost 24 hours due to strong winds.   Berthing delays remain at half a day.

Xingang –   Strong winds over the 20th and 21st April contribute to berthing delays of half a day.

Qingdao –  Strong winds over 24th and 25th April have caused delays to vessels berthing, which are at around 12 hours.

Shanghai – Less sailings have eased the berthing delays at Shanghai which are reduced to around half a day.

Fuzhou – The port was closed for periods over the 19th and 20th April due to dense fog.  Half day berthing delays remain.

نانشا – Berthing delays remain at half a day as a result of recent work on gantry cranes. 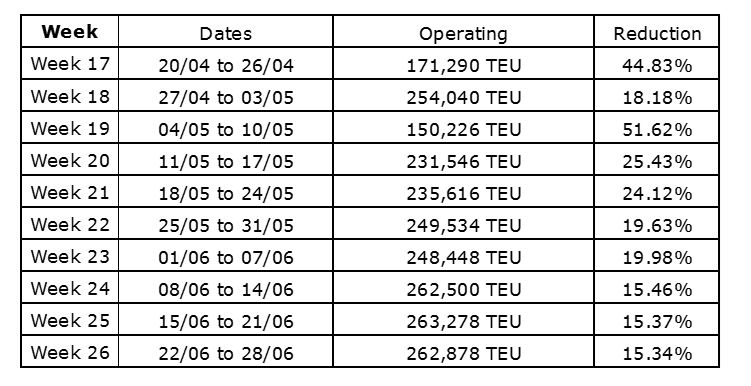 Singapore –  5 out of 19 vessels due to sail from Singapore are now cancelled in May.

Global logistics and technology provider EV Cargo has endorsed an ambitious Global Memo of Understanding announced at COP26 to achieve...

For more information and to read more about our privacy policy, please visit our رازداری کی پالیسی.